Combatting the virus of fear with compassion: Covid-19 in focus 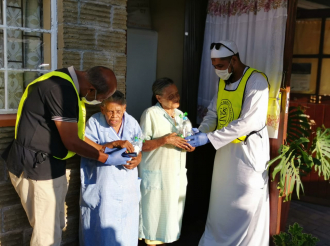 AN unwelcome and epoch-changing visitor has landed on our shores. Called Covid-19, and a member of the corona virus family, its science is not our brief here. What we do know, from the street view, is that it is hugely infectious, has a long shelf life on surfaces and if infected, one has to isolate (quarantine) for a period of 14 days.

This visitor – which doesn’t recognise class, status or international borders – has arrived in almost every country of the world, and has already infected over 700, 000 people at the last count, with expectations it still has a long way to go.

Because of this, our government has ordered a lock down, in other words a national quarantine, to try and flatten the curve of rising infections and health facilities being overwhelmed. Historically, quarantines have been the most effective in curbing pandemics – the first quarantine practiced in Venice during the Black Plague of the 14th century.

What we have learnt from the medical experts is that Covid-19’s symptoms are a fever, a dry cough, a lack of taste and smell and a difficulty in breathing. Of course, these are generalities – we leave the diagnoses up to the doctors who are qualified to do so.

We have also learnt that immune-challenged people are the most vulnerable to Covid-19, especially the elderly and the poor – which leaves us with major challenges in South Africa. These can only be met by all of us working together.

But before we rise to the very real questions we have to face, some brief historical perspective is needed. Perhaps the most famous account of mass illness, or plague, is mentioned in the time of Moses – or Musa – where Egypt was visited by the ten plagues.

Space prohibits further examination into its details. The big picture, however, is that pandemic is firstly, in the divine scheme of things, and that secondly if you don’t believe in divinity, it is most certainly a part of mankind’s history.

The Justinian plague of the 4th century is believed to have wiped out millions, almost half of Europe’s population at the time. The 8th century plague in Egypt decimated the sultanate, and the Levantine plagues of the 11th century saw towns emptied of inhabitants, with mosques and monasteries closed down.

The historian, Al-Maqrizi, writes about the plague of the 14th century, during which places of worship were again closed due to the fatalities, and the call to prayer silenced. The mediaeval Bubonic Plague, or “Black Death”, which ravaged Europe in a swathe of millions of victims, only left the city of London in 1665 after it had suffered no less than 40 outbreaks.

Smallpox decimated over 90 per cent of indigenous Americans in the 15th century, taking its toll of our Khoe and San populations at the Cape. Then there was the cholera epidemic followed by further smallpox epidemics locally and the Spanish Flu pandemic of 1918, which also hit South Africa. And most recently, we have experienced SARS, MERS and avian flu.

The most salient Prophetic advice, distilled in our beloved Prophet’s actual words, is that it is preferable for us to stay in one place and not to deliberately seek out places of infection. Our scholars and medical experts have given us practically sound advice in this regard, and there is no need to go over it again.

However, some sound philosophical guidance can be discovered in the works of Imam Hajr al-‘Asqalani, the great Egyptian scholar, who lost three of his daughters to one of the 15th century plagues. Moved by his grief, he penned a 400-page book on the plague.

In his seminal work, he argues that the plague acts as a curse on “whomever Allah wishes it to be”. The meaning is that we are in no position to pass judgement. We are not Allah.

For believers, writes al-‘Asqalani, if the plague is borne with wisdom and patience, it is a mercy. In this case, if a believing person falls victim to the plague, he cites the Prophetic axiom that they die a martyr.

At a practical level, Covid-19 is a clarion call to our compassion and to our humanity. It is going to be a test for all of us, as the most vulnerable in our already vulnerable communities are going to not only need our helping hands, but prospects of hope, dignity, security and comfort.

To this effect, SANZAF has already embarked upon a call to mobilise, for us to make a meaningful impact through our activism. There will be more about this later.

In the meantime, we have to urge ourselves to avoid the fake news, the contrived negativism and the self-righteous rubbish that is being peddled in social media like the corona virus itself. Psychologists have warned that fear has become as much of a viral threat as Covid-19, something which erodes our immune systems and makes us more prone to disease.

For as the Prophet, our exemplar, once said: “Give glad tidings, and do not scare people… Make things easy. Do not make things difficult”.

Finally, the Prophet told us that aspiring for good was in itself an act of worship. And so, in that noble spirit, May Allah Almighty in His Mercy give us all the strength to make a meaningful impact. Ameen.