OPERATION QURBANI, NOURISHING THE NEEDY IN A TIME OF NEED 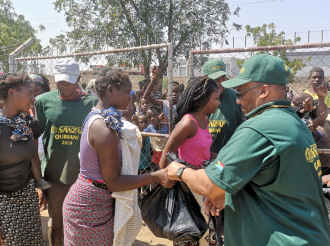 THE two ‘Eidan, the dual Arabic for our two “Eids”, are both special occasions requiring charitable acts as part of our ‘ibadat, or worship. In Ramadan, we are enjoined to give our Fitrah or Fidya, which are intended to lift the burdens of poverty.

Our fitrah, which can be given in kind or cash, is aimed at affording the poor a good meal on ‘Eid day, whilst the Fidya is a greater amount paid by those whom doctors deem cannot fast.

‘Eid ul-Adha, the ‘Eid of sacrifice, commemorates when the Prophet Ibrahim was commanded by Allah to sacrifice Isma’il, his son. Years previously, Ibrahim had been ordered by Allah to leave Hajr and Isma’il behind in Makkah, and to travel back to Hebron.

In a deeply touching moment, a distressed Hajr asks whether Ibrahim is departing because of his own volition, or because of an order from Allah. When the grief-stricken Ibrahim softly answers that it is from his Lord, she accepts her fate.

The Quranic concept of “ease after trial” is shown as Hajr runs seven times between the hillocks of Safa and Marwa. She discovers the well of Zam-Zam, a well that still provides water for pilgrims today.

The test that Ibrahim faced with Isma’il was the most supreme one. For not only had he faced the fire of Nimrod, but he had prayed long and hard for children.

This Ibrahimic moment is symbolic of just so much – from the extinction of our nafs to the expression of divine love, hope and mercy. The last-minute reprieve of a ram being substituted for Isma’il on a rock in Mina is the sign of this.

The message of the Ibrahimic sacrifice is one that has endured for thousands of years. Ibrahim, who even tried to feed the Angels, is the father of generosity. Today, the traditional Qurbani celebrates the spirit of Ibrahim, and annually, millions of tonnes of meat is distributed to the poor.

Today, as we are beset with Covid-19 and poverty, the Qurbani meets an urgent and pressing socio-economic need – basic nutrition. And whilst Surat al-Hajj reminds us: it is not the meat or the blood in the Qurbani that reaches Allah, but our piety, it is ultimately the meat that nourishes the poor.

This is because the Qurbani has far-reaching, and hugely consequential effects, for the undernourished body. To put it another way, the Qurbani plays a manifest, and impactful role, in a time of dire need.

For some decades now, organisations such as the World Health Organisation and Oxfam have been saying that malnourishment is not just due to starvation, per se, but also due to impoverished communities relying on a single food source to survive.

As a result, some people can appear outwardly well, but in reality are still lacking amino acids, minerals and vitamins so vital to good health. This is why, for example, Covid-19 has hit poorer communities harder, even in developed countries such as the US.

So, what does the successful Qurbani do on a grand scale?

According the Food and Agriculture Organisation (FAO) of the United Nations, meat consumption (in good moderation) can alleviate common nutritional deficiencies. The basis of a good diet – for the development and maintenance of health – is a variety of foods, says the FAO.

Lean meat, said to be the best organic form of natural protein, contains vitamins B6, B12 and E, as well as Zinc, Selenium, Iron, Niacin, Phosphorous and Magnesium. This is a weighty contribution to overall nutritional balance.

If one considers that for many, the donation of Qurbani meat will probably be one of the few times in a single year that they will be able to have meat in their diet, the critical contribution by agencies performing Qurbani in impoverished communities is thrown into sharp focus.

However, we cannot do this on our own, and it is due to the bigheartedness of our many donors that we have been able to service these needs. And as ‘Eid ul-Adha 2020 approaches, we look forward to making a difference, yet again.