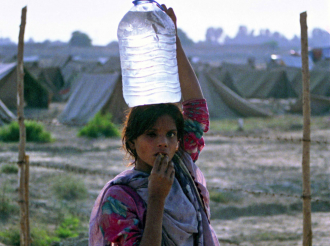 The Qur’an tells us that Allah Almighty created humankind in pairs, that men had to be kind to women. The Prophet Muhammad (SAW) supports this in Hadith, his maxims, that we should treat our women kindly. He goes on to emphasise this on his last Hajj when he speaks out against all forms of discrimination.

His wife, Sayyidah A’ishah – who would become one of Islam’s early scholars – reports that the Prophet, a gentle soul, never once beat any of his wives or servants. There are also accounts of him consoling slave women – Muslim and non-Muslim alike.

In a brutal day and age, when women were so marginalised that baby infant girls were buried alive, the Prophet’s actions are extraordinary. This is indubitably what set him apart from others, causing a ripple of concern amongst the Quraish, fearing that this new faith, Islam, would disrupt their old ways.

As a Messenger of Allah, the last of 124, 000 prophets, Muhammad (SAW) is the very seal of global Prophethood. In other words, it is imbued with Muhammadan principles that our world will end. Indeed, for when the mountains unfold and the seas boil over (as Qur’an promises), we all will have to face our Maker with the question of how we treated our women.

When it comes to this question, the Prophet’s ways are unambiguous: love, respect, consideration, faithfulness and care. And when after his first revelation he sought refuge in the comforting lap of Khadijah bint Khuwaylid, to whom he was betrothed to for 25 years, we are shown a moving fragility of his nature, even though he was a Messenger of God.

For it was Khadijah, a wealthy merchant and desirable widow 15 years his senior, who had proposed to him, a poor, humble but trustworthy 25-year old. In fact, the account of Khadijah – the first Muslim – is one of our most poignant and inspiring love stories. For during his marriage to Khadijah, the mother of his five children, the Prophet (SAW) did not marry anyone else.

Indeed, as traditions indicate, there was also never any chauvinism in the behaviour of the Prophet. Significantly, he did not expect his wife to be his servant. He milked his goats, mended his sandals, washed his clothes and swept his sleeping chamber.

The Prophet’s love of Khadijah, who supported him through the most testing of times when the Quraish boycotted the Muslims, is legendary. When he once saw a bracelet of Sayyidah Khadijah, who had passed on in 619 CE from the effects of this cruel and crippling social embargo, tears filled his eyes.

Despite marrying other women after her death, the Prophet *(SAW) would continue to show his love for Khadijah. Countless reports testify that he always kept close relations with those that were dear to her. As the scholar and former slave, Anas ibn Malik, would report: “When the Prophet (SAW) was given something, he would say, ‘Go to such-and-such person, for they were a friend of Khadijah. Go to the house of such-and-such a person, for they were loved by Khadijah.’”

It is something of an indictment, a historical irony, that today the story of Khadijah is still seen as the breaking of a stereotype. Yet in his happy marriage with her over 1,400 years ago, the Prophet (SAW) came to teach us so many things about how we should conduct ourselves with our women.

It is a fitting tribute to her that he said here were four women of Paradise: Asiya the wife of the Pharaoh, Maryam the mother of Jesus, his daughter Fatimah and his first wife, Khadijah bint Khuwaylid.

In this special month, a month honouring the women of the world, let’s make du’ah that our mothers, daughters and wives continue to enjoy the fortitude of Asiya, the mercy of Maryam, the companionship of Fatimah and the greatness of Khadijah.